Today I am going to tell you About Google Task Mate App, (How To Earn Money From Google Task Mate) You can use this app only after you enter the reference, and Google Task Mate app was launched This Version for beta testing, no official launch yet, but many people are using this Google Task Mate, because i told you that for this you need refer code then only you can use it There is no need, you can work in it absolutely free, below you are given more information, if you want to install, then you can Install it from play store.
Google Task Mate

What is Google Task Mate App?

Google recently leveraged its reward system with the launch of its Task Mate application. The app pays every Google Pay user for completing some simple and easy tasks on their smartphone. While we were busy earning free Google Play Credit from Google Opinion Rewards app, Google launched a new task application called Google Task Mate. Task Mate Application is a task based money earning application developed by Google in India.

How to Earn Money from Google Task Mate

You can complete some simple tasks in the Google Task Mate app, which will earn you money. You can withdraw your money directly from your bank account.

How does Google Task Mate work?

Task Mate provides you some tasks like Capture Photo, Transject Sentence etc. When you complete these tasks, you are paid your ₹ (Money) directly in your bank A/C. All the tasks will be based on your profile and the topics you are interested in will be given the same number of tasks.

You will find the tasks of Google Task Mate very easy, which you can complete, you will get money from that, and you can divide the tasks into categories like Field or Sitting.

Different types of tasks will be found in the Google Task Mate Application and it will be easy to complete them and it is Google’s first Earning Application and it is still working, by removing all the problems or shortcomings in it, Google will launch it officially and access it. All the users will get it so that they too can take advantage/Benefits.

Why and when was Google Task Mate launched?

its access is given to only a few beta testers/Some Users, and the version of Google Task Mate is also updated by Google from time to time, so that people do not get any problem, Google has recently launched its application Google Task Mate.

How much I can earn from Google Task mate?

Google Task Mate is an Earning App, and you guys would like to know that how much money we can earn daily from this. It will depend how many tasks are getting per day and how many you are completing, if given an estimate, then you can say $1 (₹74) or you can earn more than that. 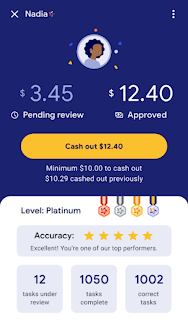 When will the Google Task Mate App be launched?

As you would know that Google Task Mate is not officially launched yet, if you go to google play store and look, then you will see Google Task Mate Early Access there because its work is going on and Google has yet to know about your Google Task Mate. No updates have been provided.

How to earn by inviting friends – google task mate r

You must know that any earning app has the option of invite friends, from where we can send that app to our friends or on any social media platform, in the same way we can also invite in Google Task Mate Application, and From that link sent by you, if someone install and registers the Google Task Mate Application on his phone and completes some tasks given by Task Mate, then you will have some earning.
Google has not fully launched this app, thats why more There is no information that how much money will be received per invite.

Task Mate Application is currently Early Access means Google is doing research in this app and Task Mate has a referral code which Google has not provided to everyone and the referral code keeps updating so that many people do not use this app. Could do, but if you want to use then comment below.

Also Read: How To Use OYO Money

How to Find AirPods Case in Just 2 Minutes (Easy Way)